Top 15 Vancouver Festivals, Celebrations and Markets in the Spring or Summer

When it comes to Spring and Summer festivities in Vancouver, there are so many choices and too little time. We’re here to help you sift through the multiple suggestions and here are our top picks for the biggest and best festivals, street parties and markets: 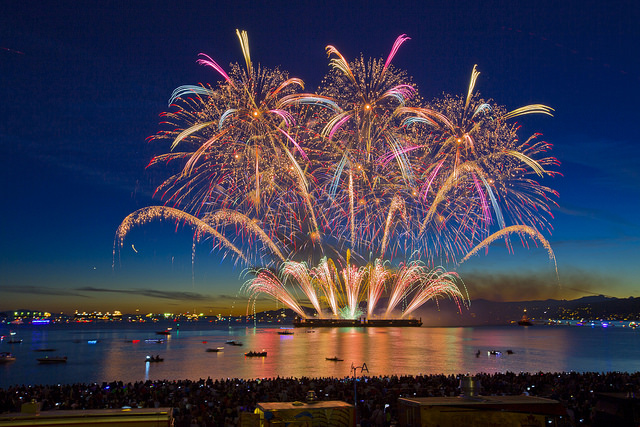 Photo of Honda Celebration of Light Festival by GoToVan on​ Flickr. https://flic.kr/p/JCWGw5

This event is one of the best fireworks displays in the world and one of our biggest summer events, crowds flock to the waterfront around English Bay and Burrard Inlet, setting out picnic blankets and folding chairs on the beach to take in the show. Fireworks are choreographed to music as they’re launched in front of our picturesque backdrop of the English Bay for three summer nights at the end of July and three countries compete each year to wow Vancouver crowds. Bring a picnic and make a night of it! Bands start hitting the stages on the beach in the early afternoon, getting crowds warmed up for the spectacular main event. 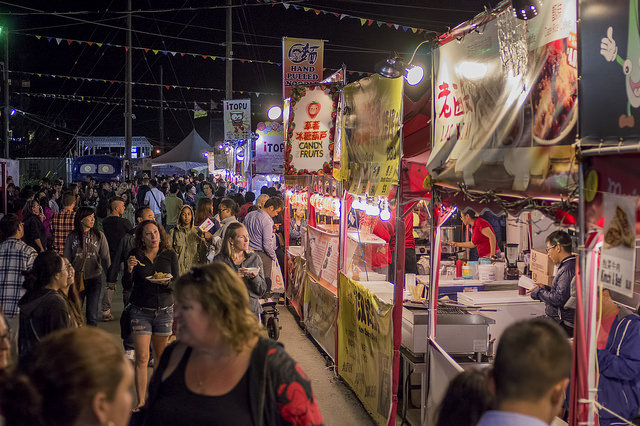 Richmond Night Market opens its gates annually to bring us food, inexpensive knickknacks, games and entertainment during Fridays, Saturdays, and Sundays from May until October. Drawing crowds of locals and visitors alike, the market boasts an impressive cross-section of cultures and cuisines. You can expect to find a variety of mouth-watering food, including curly potatoes on stick, spicy squid rings, barbecued skewers, bubble waffles, mango desserts, and more.Get there early, bring plenty of cash (this is a cash only event) and prepare to feast and have fun!

May to October
Bridgeport Station next to River Rock Casino Resort
http://richmondnightmarket.com/

Bard on the Beach Shakespeare Festival 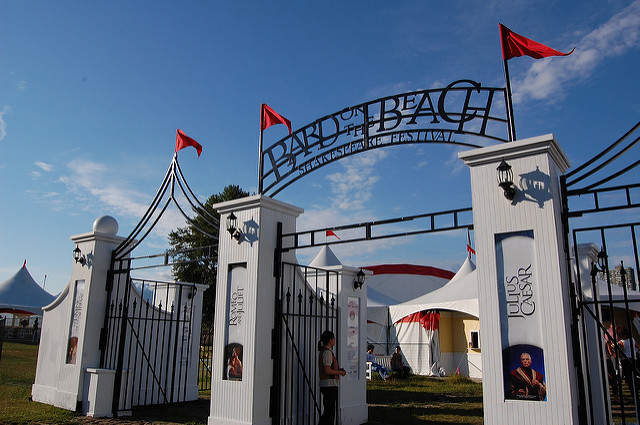 Photo of Bard on the Beach entrance by *MandyJ* on Flickr: https://flic.kr/p/2hN5PW

Presented in a magnificent setting on the waterfront in Vancouver’s Vanier Park, the Festival brings to life the magic of Shakespeare’s great plays, related dramas, and several special events in two performance tents from June through September. In addition to its plays, the Festival offers opera, choral and orchestral concerts, wine tastings and educational events. The tented Bard Village is home to many activities and amenities including informal pre-show talks, concession and bar services, and the Bard Boutique. 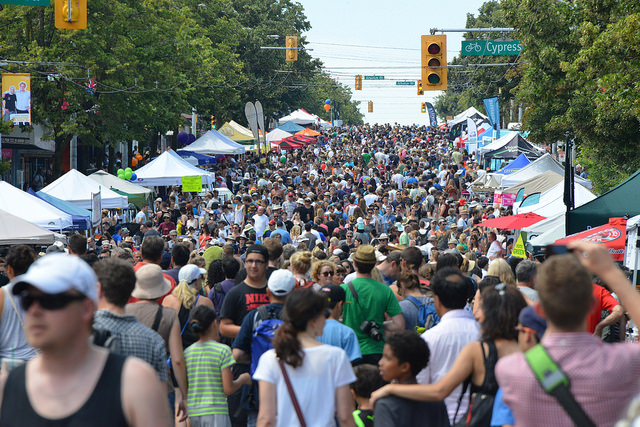 Photo of Khatsahlano Street Party by Sherwood411 on Flickr: https://flic.kr/p/oirPYG

Looking for a large street party that is also a music and arts festival? Look no further than Khatsahlano,squeezing in 50+ bands, beer gardens, food vendors and tons of fun in one day. Great local music will provide the soundtrack and Vancouver will provide the backdrop. During thsi event, West 4th Avenue in beautiful Kitsilano will transform into a 10-block street party, with local shops and restaurants taking to the sidewalk with sales, samples, giveaways and games. 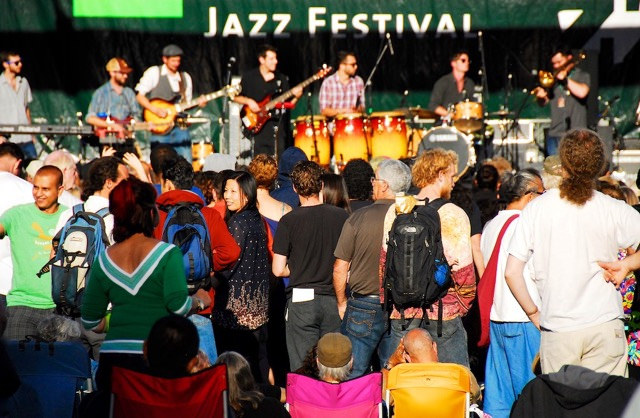 The Vancouver International Jazz Festival happens annually for ten days at the end of June and is BC’s biggest and most acclaimed music festival with over 400 concerts attracting more than 500,000 people each year. Rich tapestry of jazz, blues, funk, Latin, fusion, electronica and world music fill the air at venues big and small, indoor and outdoor across the city featuring over 1800 musicians from Canada and around the world performing at over 40 venues citywide.

Fair at the PNE

Carnival games, shows, attractions and delicious food options are enough to make this the ultimate summer spot. With over 35 new nightly concert acts and tons of local favourite such as the Super Dogs, the Woodcoaster etc. there’s no reason to miss out. Come early and bring your own food if you like to save some money. Most importantly, plan a schedule for all the different events to see; the fair is slightly different each year. 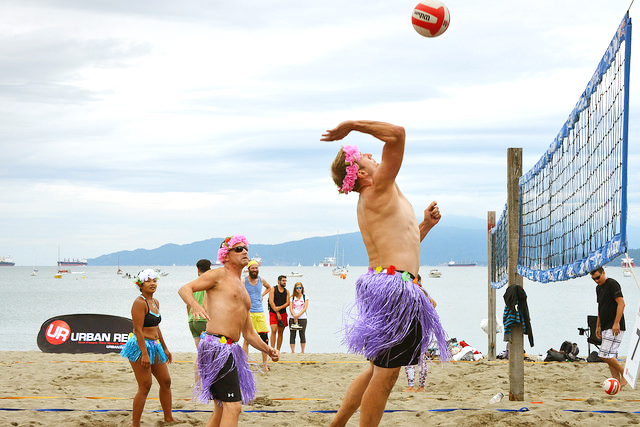 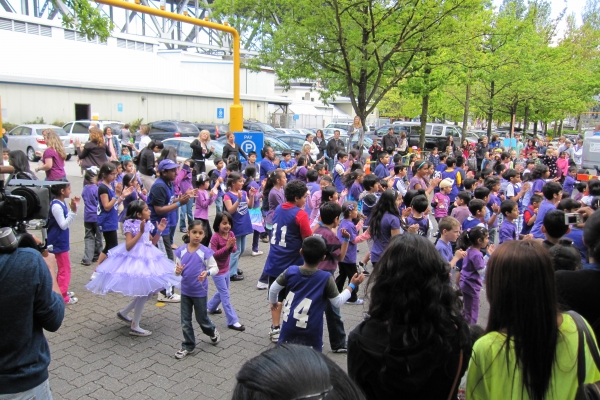 A joyous and stimulating experience for the youngest of audiences, the Vancouver International Children’s Festival is a world-renowned weeklong festival of performing and visual arts for young audiences. This intimate performance is designed to capture the imagination and curiosity of the little ones. Don't miss this rare opportunity presenting theatre, music, dance, circus, puppetry and storytelling using the language of music and movement. 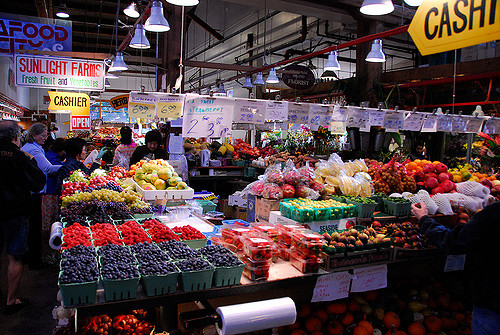 Celebrating over 30 years of all things fresh straight from the farm, Granville Island Farmers Market is the most established and oldest of its kind in Vancouver. Throughout the summer and early autumn months, it’s the go-to place to get the freshest produce from local farmers - from the field to your table. And while you’re there, don't forget to stop by the Public Market at Granville Island (a favourite destination for locals and tourists alike). Open all year long, there are produce vendors, along with local food and craft artisans, prepared foods and so much more to see and do.

Granville Island
Every Thursday from June to Late September
http://granvilleisland.com/granville-island-farmers-market 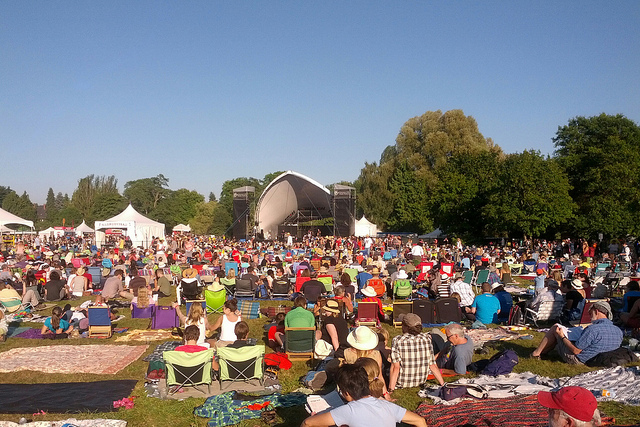 Taking place annually the Vancouver Folk Music Festival (VFMF) consistently lures an array of local and international talent to Jericho Beach Park. The Festival features more than 70 hours of music on eight outdoor stages --three evenings of mainstage concerts and two full days of performances throughout the park. The Festival also features a twenty-vendor food area, a crafts market, a stage, a Festival Community Village and an activity area dedicated to the little folks and their families.Bring a blanket or tarp to sit on the ground. The maximum size of blankets and tarps allowed on-site is 8’x8′. Lawn chairs are permitted but the chair legs have to be under 4.5 inches or 11.5 cm. 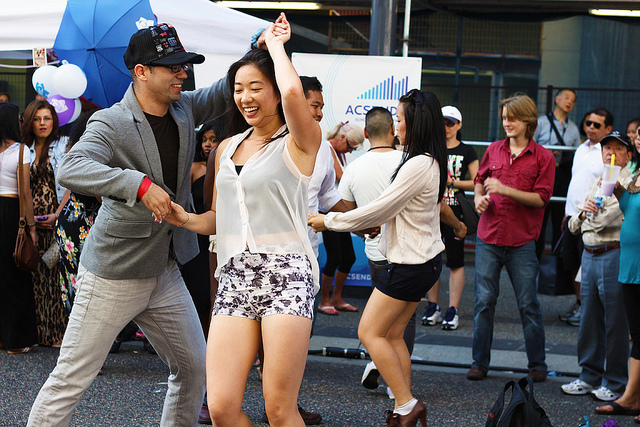 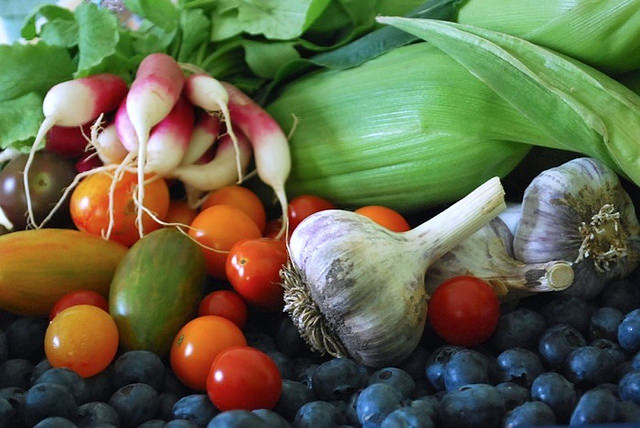 When it comes to eating local, there’s no better place to start than a farmers’ market. Meet growers, bakers, farmers and craftsmen who bring their wares straight from their fields and workshops to your shopping bag. Vancouver’s farmers’ markets offer a great chance to explore what’s in season, and for consumers to get to learn more about where their food is coming from, new ways to prepare it, and spend some time out in the community.

Sundays until the end of April
PNE Fairgrounds (North of PNE Forums)
http://www.pne.ca/showsandevents/community-and-culture.html 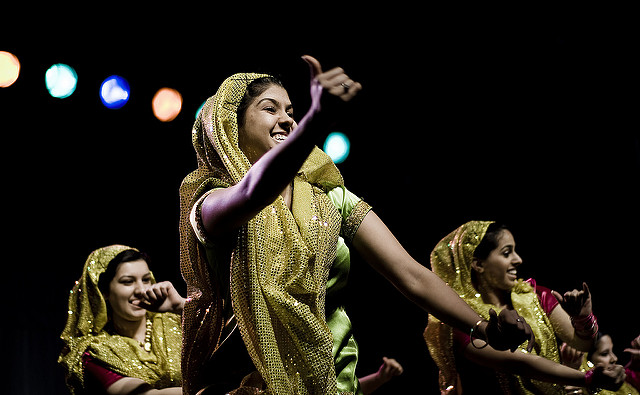 Photo of the City of Bhangra Festival by Carson Ting: https://flic.kr/p/62urpo

The largest Bhangra Festival in North America, City of Bhangra Festival, takes place in Vancouver for a week in mid-June. This massive celebration will include 350+ performers and more. The festival often ends with a Downtown Bhangra (the biggest backyard bhangra party of the year), which features a two-day open-stage party with non-stop bhangra and entertainment in the heart of Downtown Vancouver.

A week in mid-June.
http://www.vibc.org/city_of_bhangra_festival 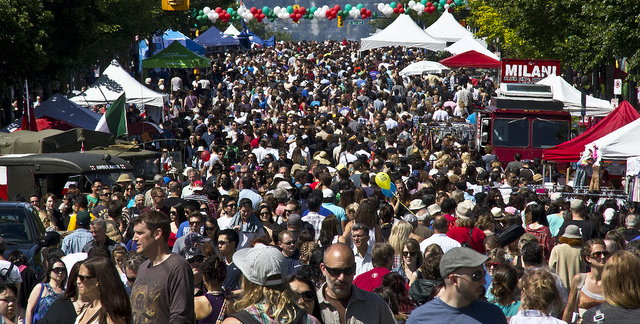 Italian Day on The Drive is a vibrant cultural street festival celebrating Italian culture, heritage and respective immigrant contributions in Vancouver. Every year, 14 blocks of The Drive–from Venables to Grandview Highway gets transformed into a living, breathing, cultural party. Decked out with merchants, food vendors and restaurant patios, as well as live music, street performers, theatre, children’s amusement zones and more, Italian Day on The Drive represents one of the largest one-day cultural street festival in the city 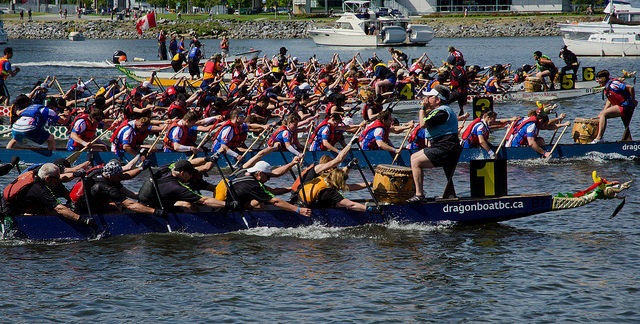 So much family-friendly fun, with loads of action, food, music on the World Beat stage, and art – and it’s free! The 3-day fest of world-class dragon boat racing features more than 5,000 racers from around the world paddled in unison to the sound of beating drums in races that run in eight-minute increments. From its beginnings as a modest attempt to build bridges between ethnocultural communities, Vancouver’s Dragon Boat Festival has grown over the years to become a major summer event in the city.

Things to do in Vancouver, Activities and Attractions, Shows Festivals and Events
Read More 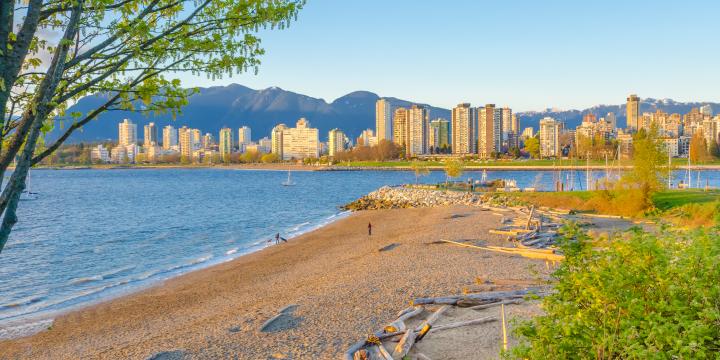 Things to do in Vancouver, Outdoor and Nature Activities

Best Beaches to Visit in Vancouver 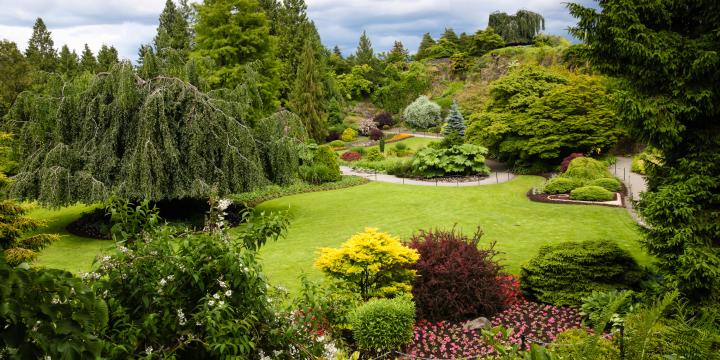 Activities and Attractions, Things to do in Vancouver, Outdoor and Nature Activities

7 Beautiful Parks and Gardens in Vancouver

Check out our current deals!