When you take a stroll through downtown, chances are you’re walking down a street, passing by a building or looking at a statue that Douglas Coupland has written about or even designed himself. With the ghost of Coupland accompanying you at every corner of the city, why not get accompanied with him?

With the artist’s first major survey exhibition almost coming to an end, now is the perfect time!

His exhibition is called ‘everywhere is anywhere is anything is everything.’  And I am sure you’ve seen these posters advertising it everywhere! 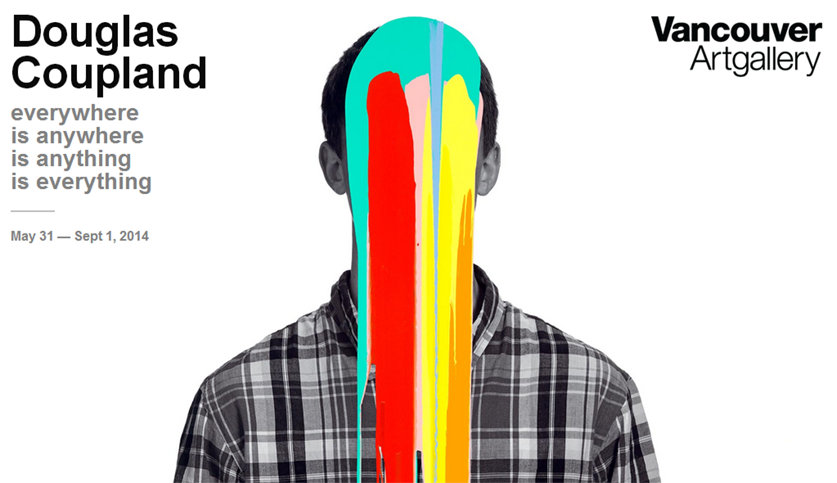 Yet, contrary to what the name suggests, the exhibition is not everywhere, so a stroll to the Vancouver Art Gallery is required on your part, but don’t worry, there’s a lot to see on the way.

BUT, before you start your stroll, remember to bring these things:
•    Your smartphone
•    A device with a digital camera
Also, grab a piece of gum and start chewing.

When you step outside the YWCA Hotel, your first stop will be a literal stone throw away — assuming you have a good throwing arm.

Terry Fox Statue at BC Place

The first stop on the Coupland Tour is BC Place — the site of the Terry Fox statue. Coupland, who is also an author, wrote a biography about Terry Fox. While writing, he became very close with the Fox family and ultimately designed the four bronze statues that stand outside BC Place. 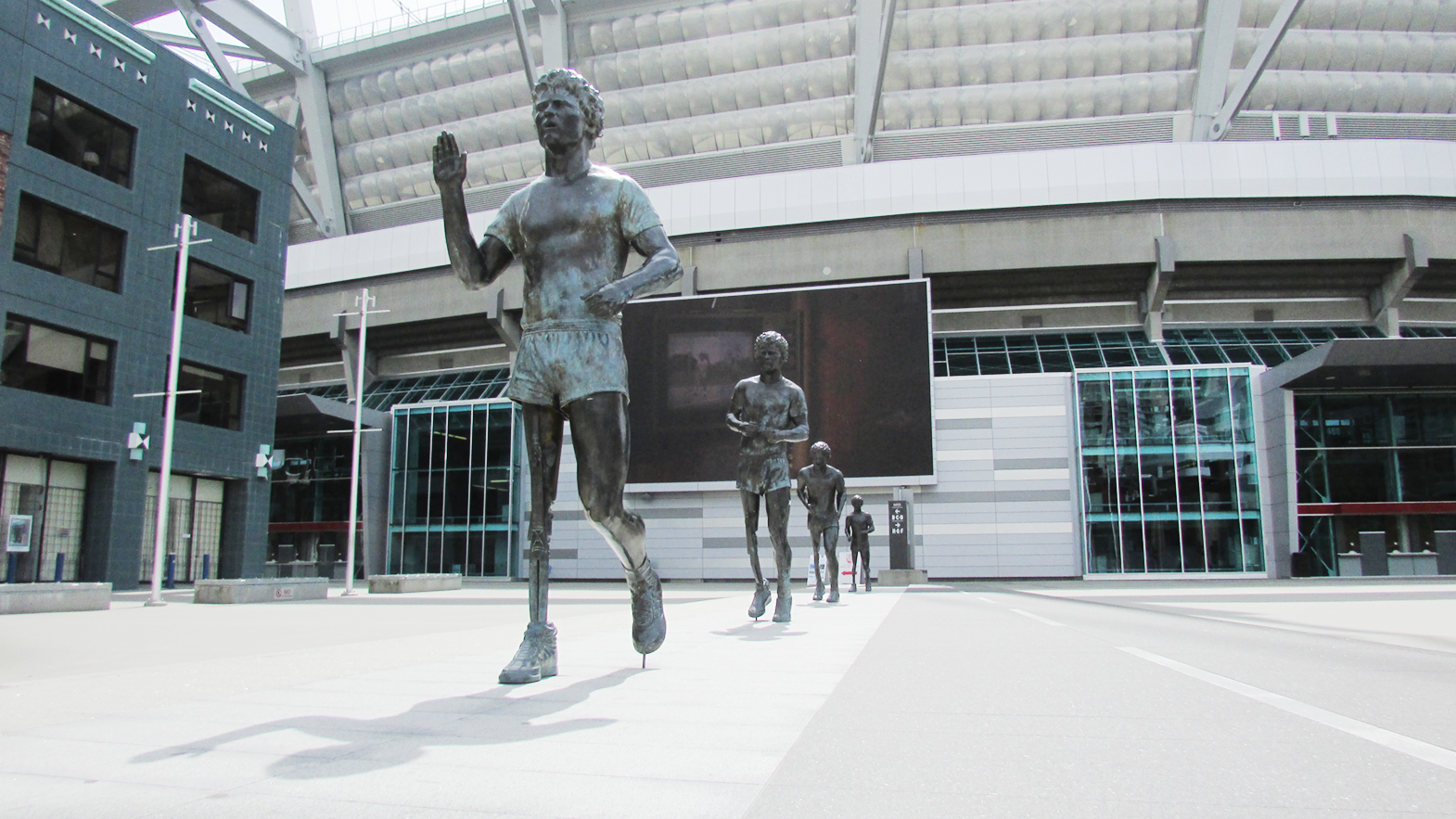 Each statue is larger than the previous one and shows a different position of Fox’s unique step-hop gait with the signature ‘Terry wave’ depicted in the largest statue.

Since you’re already walking down Robson towards the Vancouver Art Gallery, stop for a moment and take in the architectural wonder of the Central Library Branch. The building occupies an entire city block and has a design reminiscent of the Roman Colossuem. 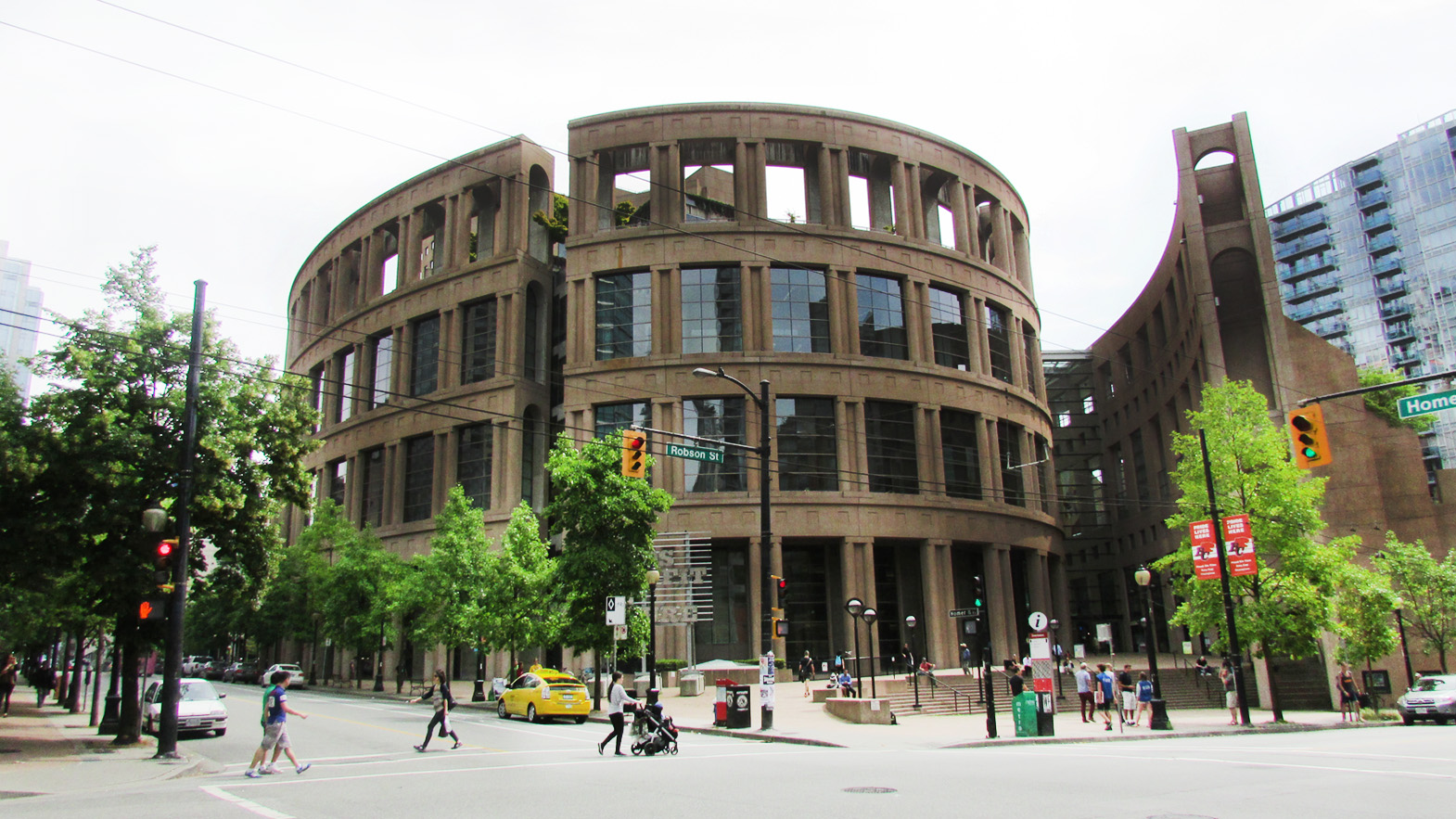 It is the brainchild of the famous Israeli/Canadian architect, Moshe Safdie, who also designed Habitat 67 in Montreal and the National Gallery of Canada in Ottawa. Basically, he’s an architectural superstar even though critics aren’t a fan of his work. (One critic actually called the Central Library “a decent building dressed up in drag”). Whatever the case, be sure to do some quiet reading in the outer column reading areas accessed by bridges spanning the light wells.

Remember that gum you were supposed to bring along with you? Well, this is what you need it for! Make some art by sticking your gum on the statue then ‘head’ into the gallery! 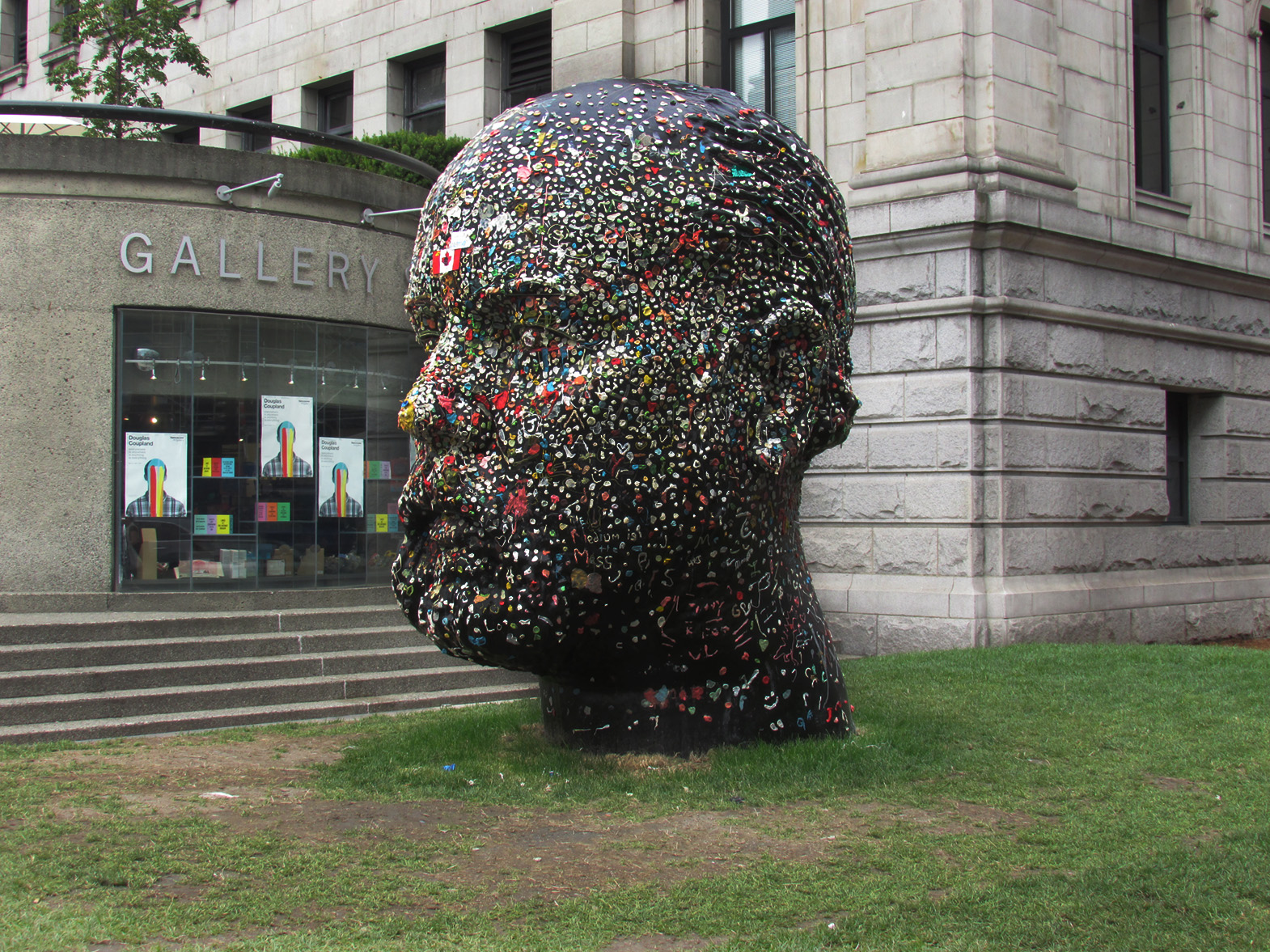 The exhibit has six distinct sections and each deals with a different theme.

This collection is an attempt by Coupland to identify the Canadian identity. It is populated with everyday objects ranging from hockey trading cards to imported canned foods. It also includes a collection of photographs featuring ‘Canadian objects’ as well as a collection of reimagined paintings of famous Emily Carr and Group of Seven works. According to Coupland, the basic intention is that Americans should look at this exhibit and think, “Everything looks familiar and yet nothing is familiar.” 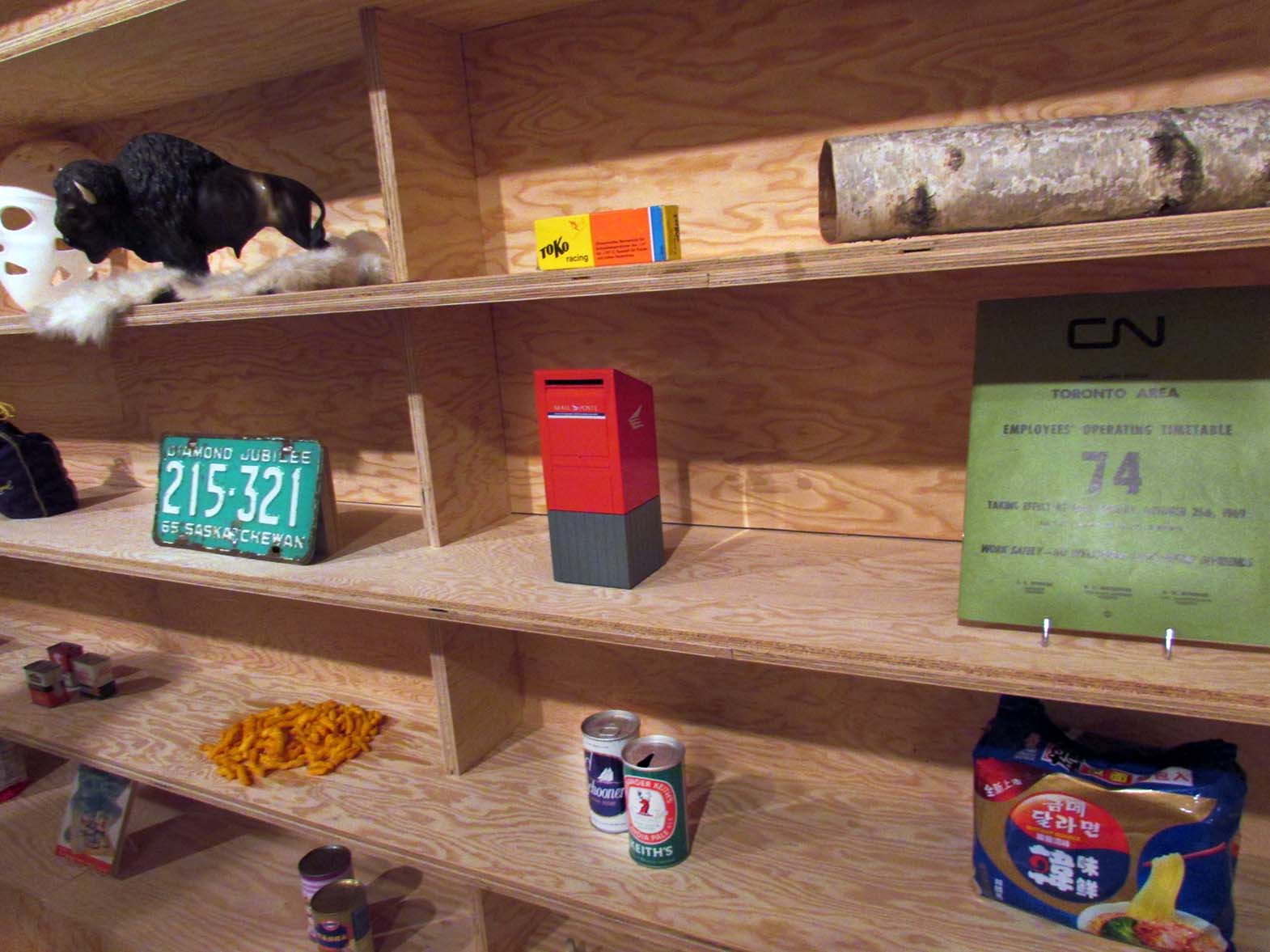 These works are a meditation on the optimism felt by people who grew up during the post-war era. It features fantastical skyscrapers and a model of a suburb with repetitive identical houses. Everything is built with lego, which Coupland calls the accompanying hardware to the software of our brains. 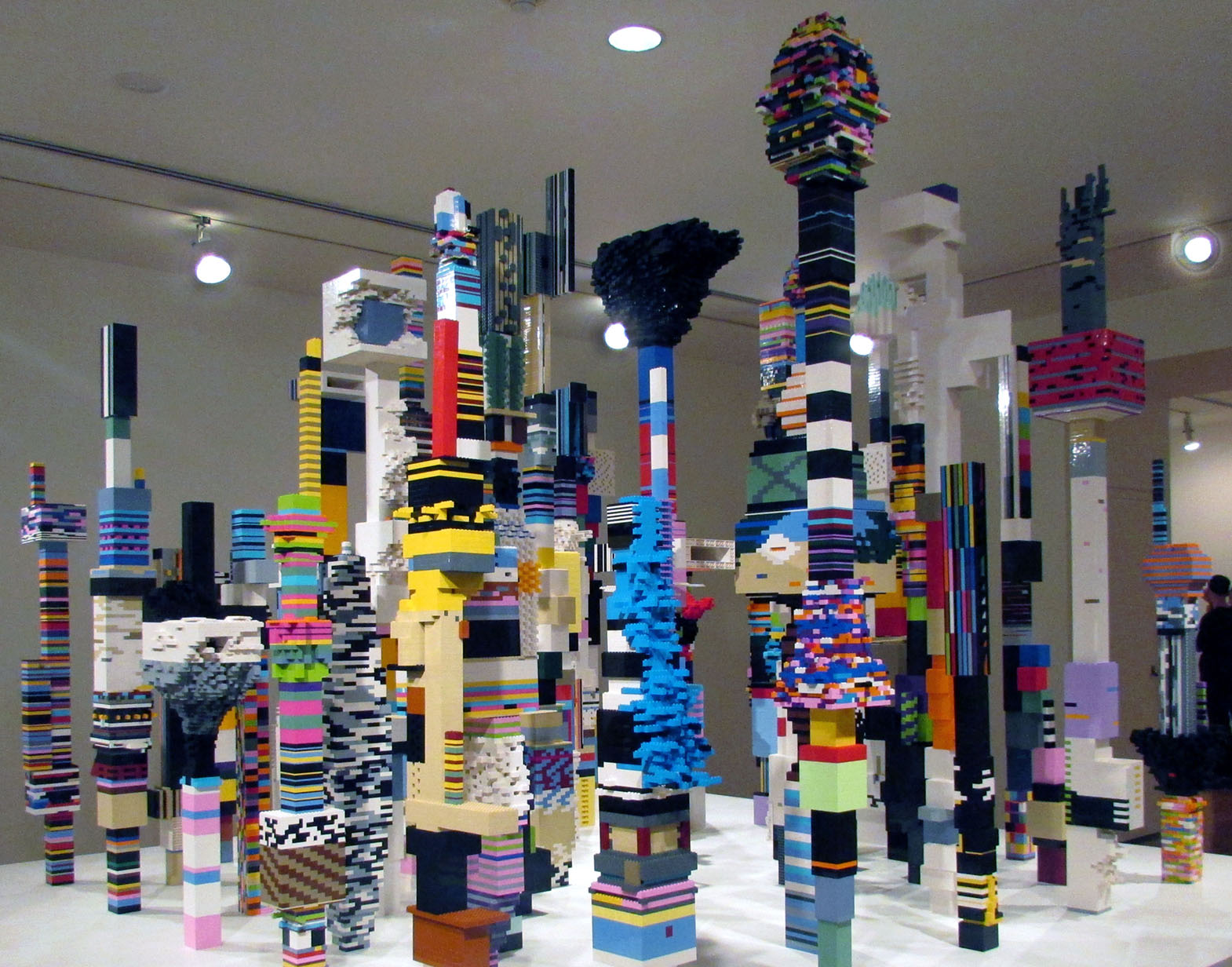 This exhibit integrates the symbolic power of language with the visual object to serve as commentary. This is seen through the Talking Sticks series which uses children’s building blocks to create sombre and gloomy phrases (like “Poison Pill” and “Tombstone”) to juxtapose with the blocks’ cheerful colours and educational purpose. 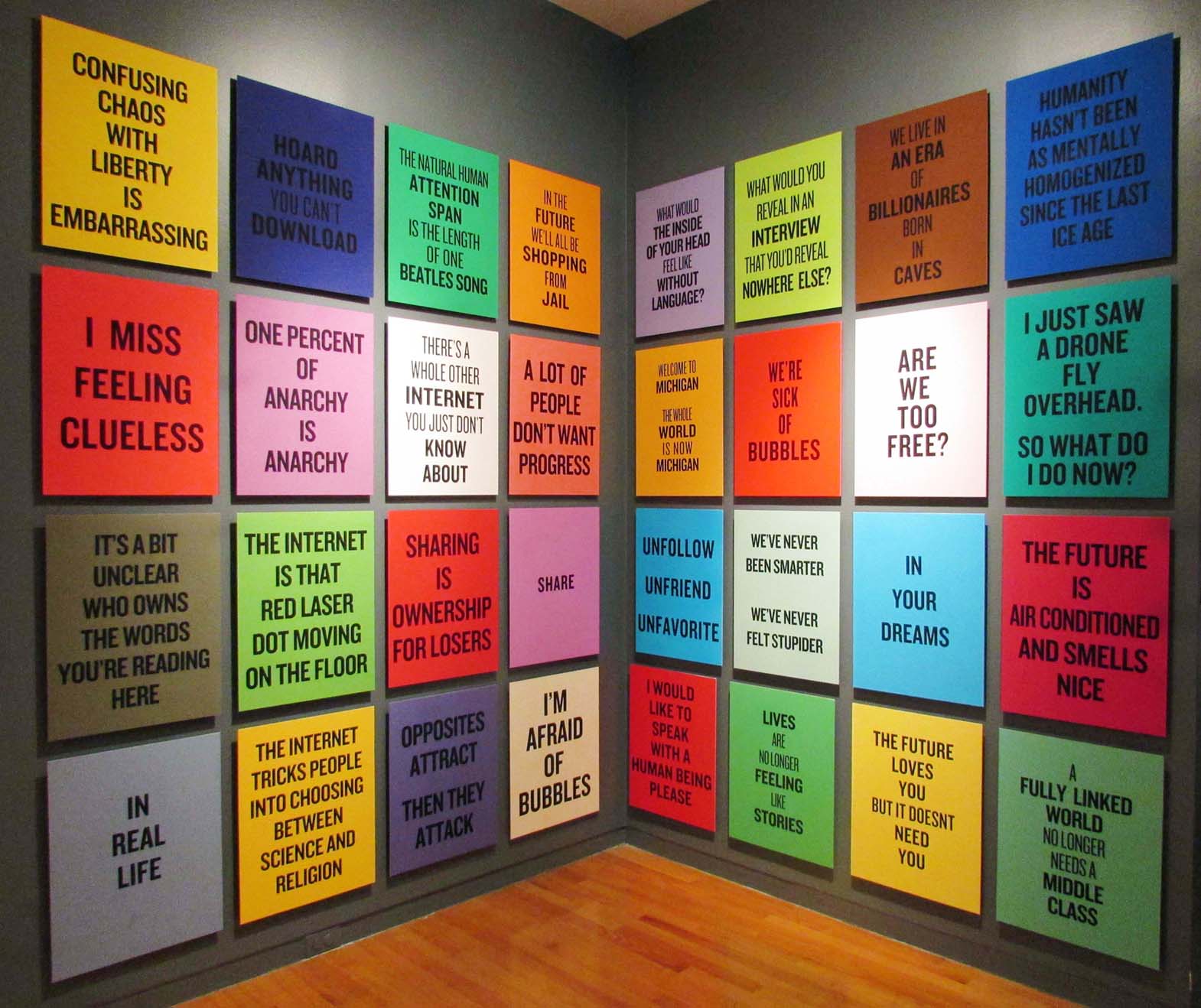 Coupland is fascinated by pop culture and the works in this section are his update on the Pop art aesthetic. He reimagines famous Pop works and uses new technology to give them new meaning (like painting Mondrian-inspired QR codes). 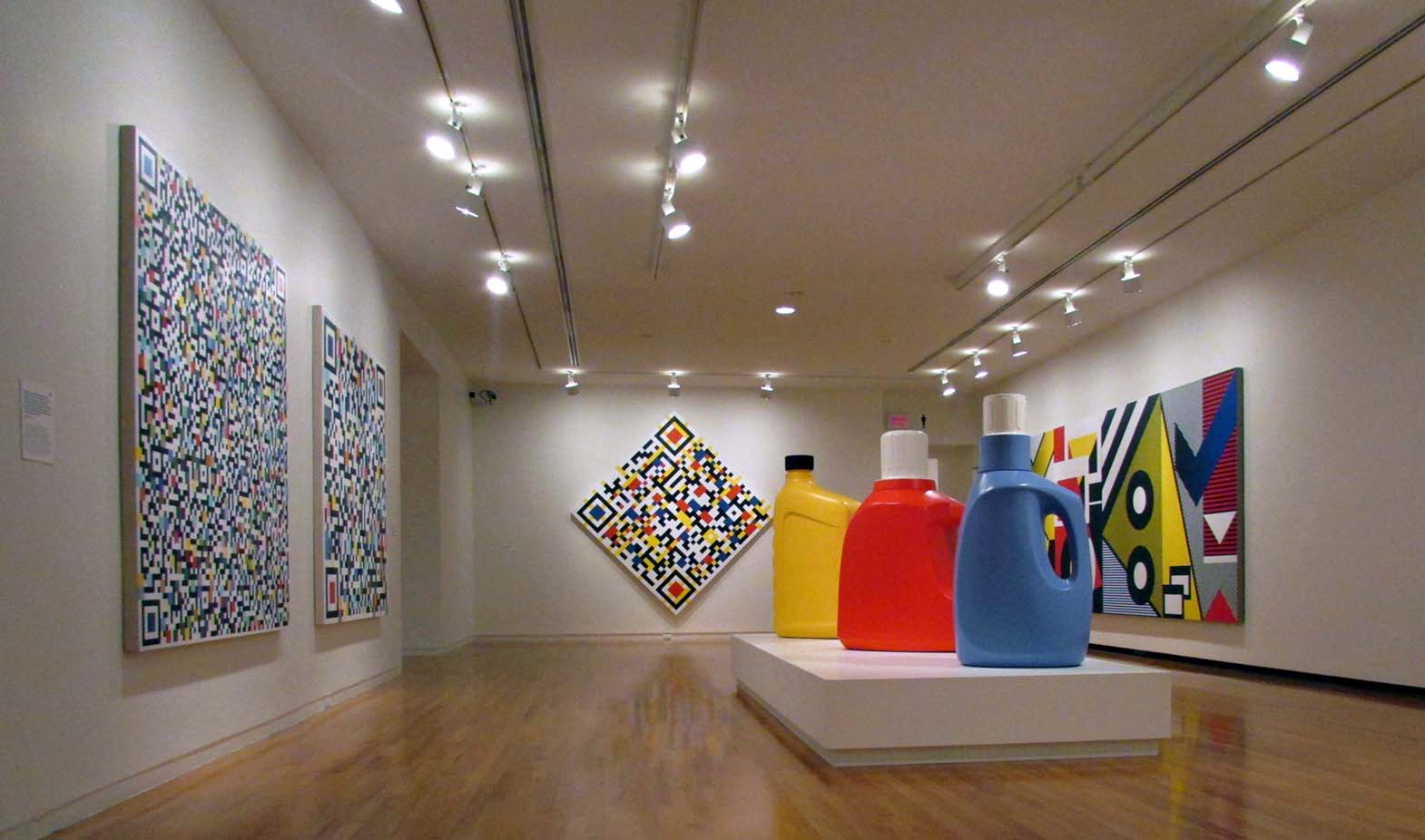 This is a look at the darker side of life in the 21st century. It uses models of dystopian cities to showcase the impact of environmental degradation and the effects of consumerism and consumption. The paintings in this section are created using an arrangement of dots and you need to a digital camera to view them. This is because of the way the pixel grid in your camera groups together the dots in the painting — cool, huh? (Try it out on the picture below!) 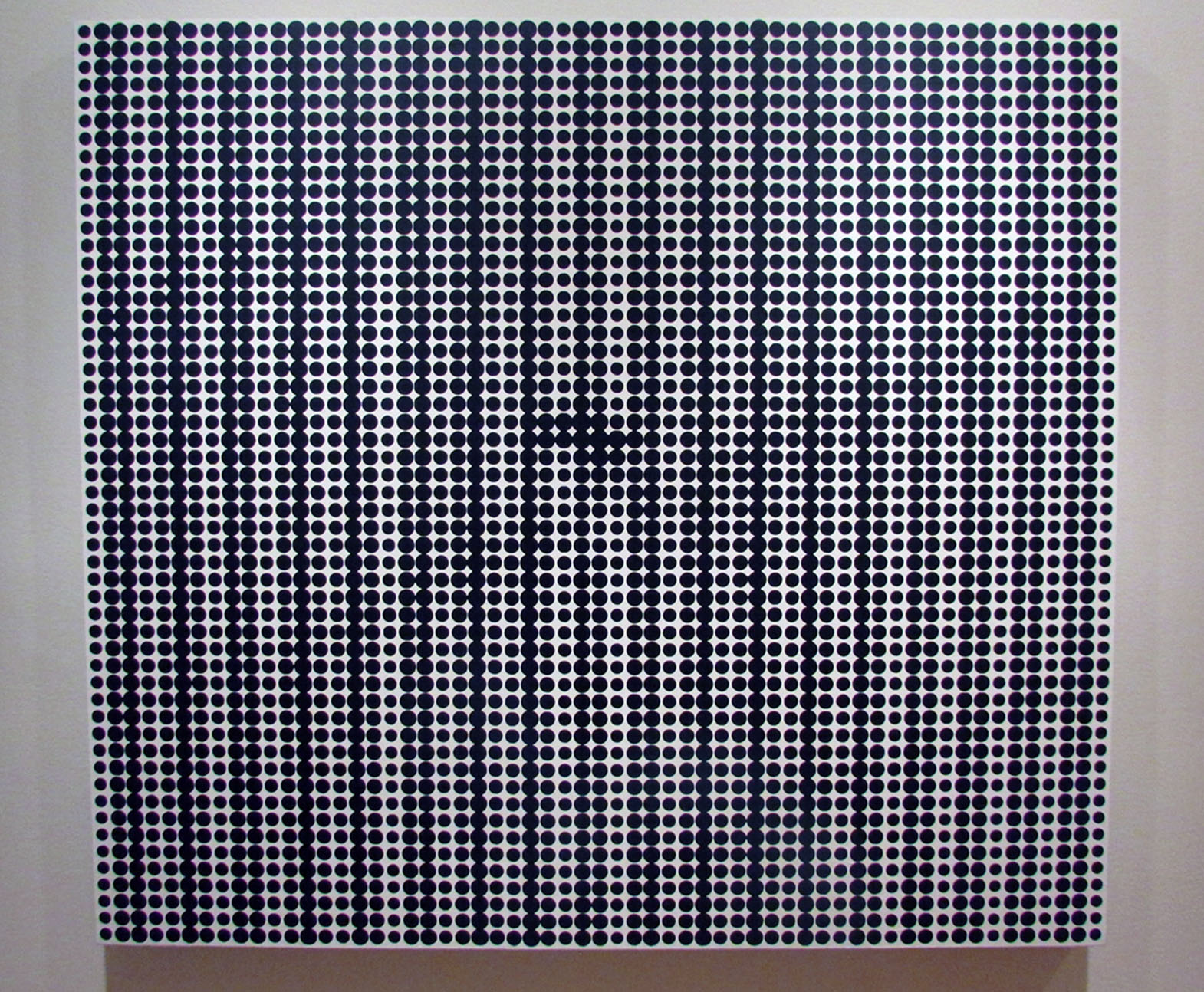 This 5,000 object installation is created using items that Coupland has collected since 1993. It is a three dimensional still life which represents the subconscious of the artist. 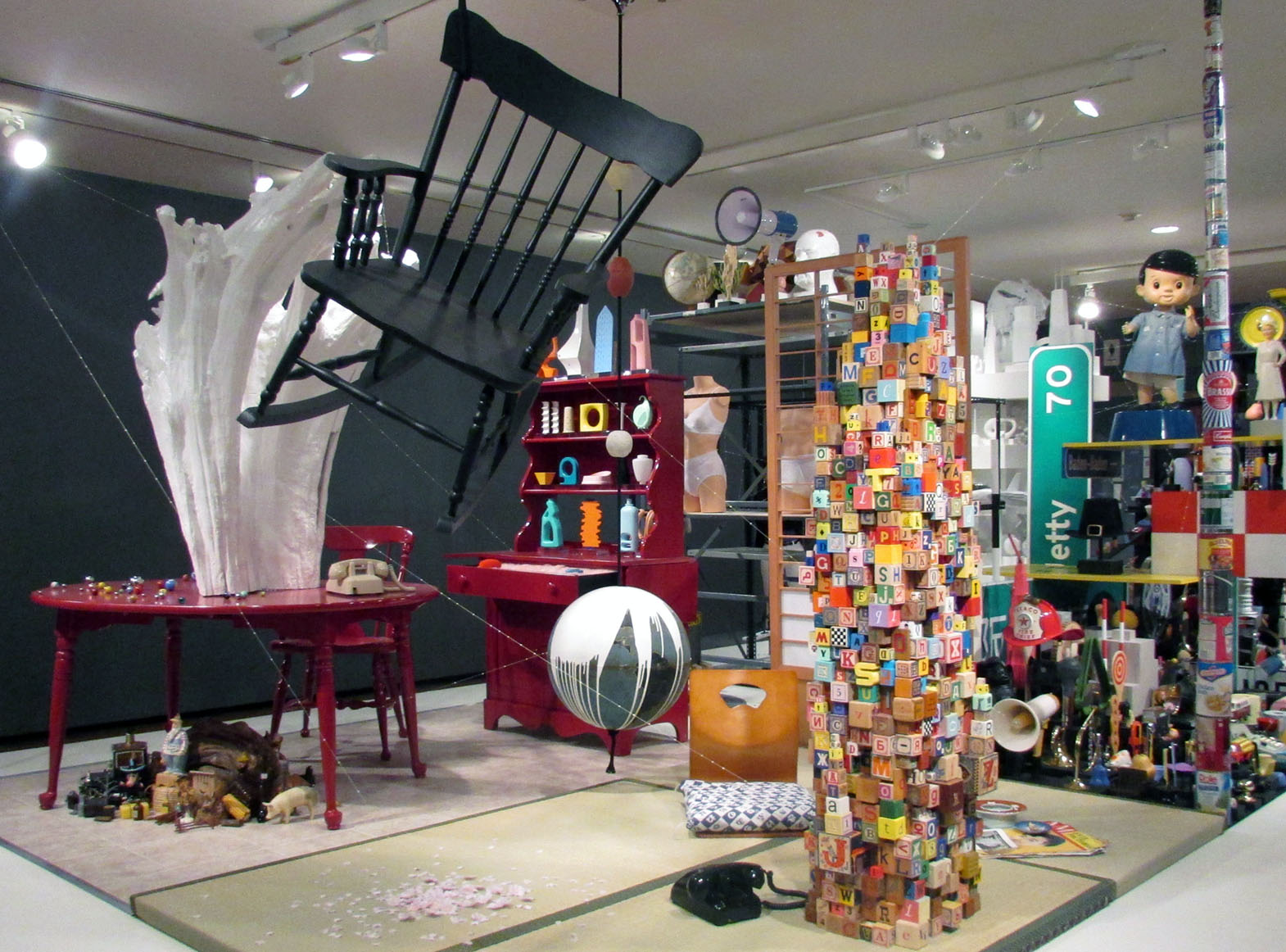 For more the exhibit, check out this video!

So, you’ve finished the tour and seen Coupland’s exhibit at the art gallery, what now?
If you still have some adventure left in you, head over to the Vancouver Convention Centre! There’s a whole strip of restaurants to choose from, a beautiful view of North and West Vancouver, not to mention the refreshing ocean air! This is also the site of another Douglas Coupland statue: the Digital Orca! It is a three-dimensional rendering of an 8-bit orca whale and the perfect ending point for your day. As the sun sets, the colours reflect beautifully off the statue—a breath-taking scene. 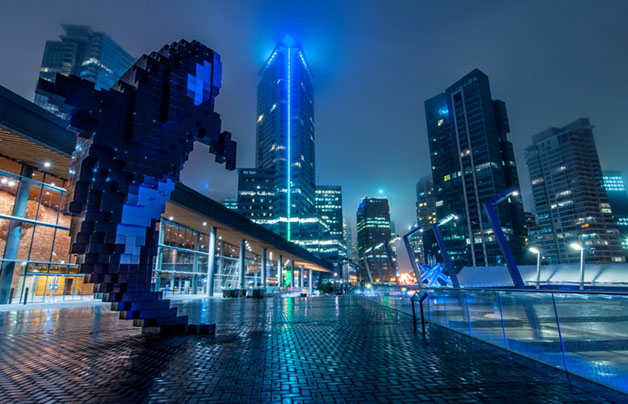